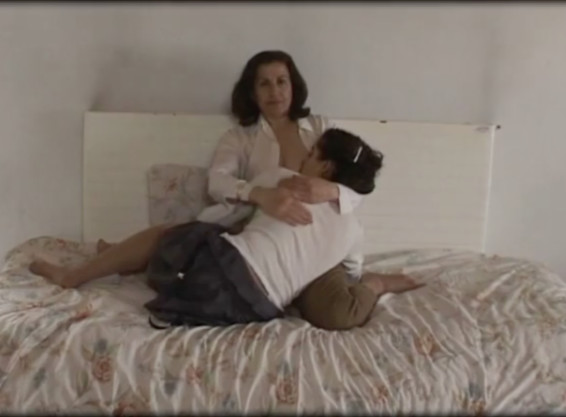 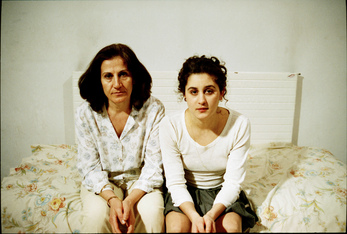 Document media Video, colour, sound, 3:00 min  | Issue date 2007  | To be seen in re.act.feminism #3 – polyphonies. interferences. drifts; re.act.feminism #2 - a performing archive, 2022-2023, 2011-2014  | Relations selected by Anni Puolakka for re.act.feminism #3  | Tags roleplay, maternity, childhood, intimacy
Jumana Manna (*1987, USA) was born in the US, but grew up in Jerusalem and studied at the Bezalel Academy of Arts and Design and the National Academy of the Arts in Oslo. Her works, such as “Familiar”, reflect on human identity in relation to gender and personality as well as collective identity, for example concerning the conflict ridden situation of the Palestinian population. “Blessed Blessed Oblivion” (2010), for example, comments on the lives of young men in occupied East Jerusalem as a lost generation paralysed by frustration.She exhibits extensively: with solo shows at the Museum of Contemporary Art Antwerp, and Berkley Art Museum, San Francisco, both in 2021.

In Familiar, the artist revisited a scene from her early childhood. She lay with her mother in a bed and was breastfed by her. The artist playing the role of the baby is actually old enough to have her own baby, while her mother seems to be past that age already. This generational shift creates a disturbing moment of agitation, as does the artist’s attempt to recreate the immediate intimacy of early childhood and the unconditional love between a mother and child. KB